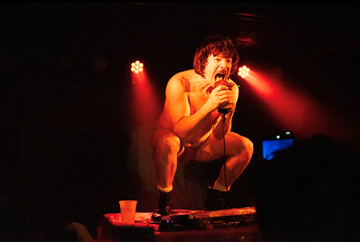 Leather jackets with grey hair draping over the shoulders, arms covered in fading tattoos now a seaweed green, a few pairs of youthful eyes, and faces with fresh piercings - the bunch who gathered at the Independence Branch of the Chicago Public Library on a recent winter evening were eclectic and diverse in age, but similar because they all had a love for punk.

The Independence Branch screened the documentary “You Weren’t There: A History of Chicago Punk,” which ironically communicated that no one was really there, because the Chicago punk scene had ended where it began: underground.

Geographical location plays a large role in finding stardom, but perhaps these bands remained underground for other reasons, such as their questionable content. For example, in the late 70’s a band named Silver Abuse released a song titled “All Jews Must Die.”

When Camilo Gonzalez was interviewed about the song for the documentary, he explained “it was actually satirical at the time. The Nazis were marching in Skokie. So, we had that song and unfortunately, the lyrics were not as intelligible as they could have been.”

Despite the absolute distain and disregard for social implications, that song is an example of what punk is. Punk goes beyond being a genre of music. It is a mindset focused on deconstructing social structures and institutions through absurdity, and maybe causing a little mayhem. As Timothy Powell from Metro Mobile Recording explained, “Punk is about being pissed off at the general condition.”

When the interviewees were asked about punk today, their responses gestured that there were no real punk rockers left. Dave Springer from Tutu and the Pirates said, “We were all angry. I wonder what happened to all the anger.”

However, on December 18, not long before the library presentation, a middle-aged man disproved these accusations -- all while sporting a Speedo despite his ballooning beer belly. Silverio, an electric punk artist, graced the stage of The Subterranean in Wicker Park exemplifying that punk is alive and well, and still angry.

Silverio’s performances consist of people throwing things such as beer cans and middle fingers at him while he says bad things about their mothers.

As this may look idiotic and pointless, it’s important to acknowledge his performances are well curated. His music is intended to be heard live, reconnecting the audience to the experience of going out to shows. He aims to make people uncomfortable and to bring out their primal instincts.

Jann Diaz from Chicago says she went to his show “to see the reaction of people who never heard of him before” and “el dismadre” (the riot).

“The point of the show is to shake up all these people walking around like mindless imbeciles,” Silverio (aka Julian Lede) told Richard Villegas four years ago on Remezcla.com, a digital publisher, creative agency and entertainment company for Latino millennials in the U.S., Latin America and Spain.

Lede compared his improvisation-heavy shows to those of television evangelists in the United States, “who congregate hundreds of people and make a spectacle of the whole thing. I’d go so far as to say those preachers are more intelligent than most rockers today. It’s important to remember that what elevates a show to spectacle is the audience.”

Lede reflected that truth is often stranger than fiction. During this jarring political era, who better than punk artists to challenge the confines of society, to show the social progressions that have  - and haven’t - been made?