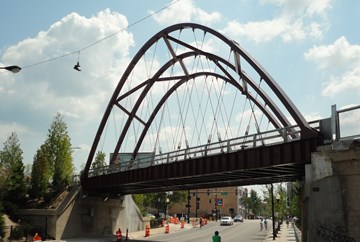 The 26th ward, meanwhile, includes the south side of Bloomingdale from Humboldt to Lawndale.
Reyna Luna works with Grassroots Illinois Action (Humboldt Park), a local activist chapter that organizes to politically empower marginalized populations. Luna, a friendly and straightforward woman, has lived in the Humboldt Park neighborhood adjacent to the trail for 14 years. She wanted to make it clear that she really likes the trail, particularly because it provides a safe place for bikers away from cars and is a good place to exercise.
Indeed, as I walked the trail, I noticed that a lot of the bikers did not seem to be the type you would normally see risking Chicago traffic, which is notoriously bike-hostile (and even deadly). The frequent access ramps are also a really nice touch, as they are not only convenient for bikers but also allow people with disabilities to easily access the trail.
Luna says she is not against new people coming in to the neighborhood, she is just against people who want to push other people out. She said the solution is education: homeowners need to learn about the values of their homes and how to fight displacement, and newcomers need to learn about the culture of the people who already live there. Basically, integration is a good thing, gentrification is not.
She also said, to paraphrase, that she doesn’t think the issue is primarily a racial one, but mainly a problem of income disparity and class differences. She believes that individual neighbors care, but she notes that newly constructed apartments vastly out-price what existing residents could hope to afford. Luna notes that this issue effects both renters and homeowners, because rents will go up if taxes do.
Ivis Garcia is an activist representing the Puerto Rican Agenda, an organization that has long resisted gentrification. It has also worked on housing and homelessness and in 2008 released a study of the Puerto Rican community in Chicago. More recently, the Puerto Rican Agenda has worked against the 606 becoming a catalyst for displacement.
“We shouldn’t have to be choosing between” having a nice new trail and a lack of improvements, Garcia said. The 606 is a rare exception, a project that has successfully (and quickly!) improved diverse neighborhoods across a spectrum of racial, class, and other factors. Garcia, incidentally, is herself an example of the type of good neighbor to whom Luna alluded, an individual who moved to Chicago later in life and yet quickly developed a passionate advocacy for the local community.
Garcia stressed that a key way to prevent gentrification is to have plenty of nonprofits serving the area. She said rents tend not to go up when there are lots of nonprofits providing services and community ties to residents in need.
She also said that Chicago needs to provide tax structure reform to protect the vulnerable instead of exploiting them. She echoed Luna’s words regarding potential gentrifiers, saying that newcomers should be culturally sensitive and shouldn’t try to “take over, criminalize, marginalize, and erase” current residents. She sees hope in “people who want to be involved in the neighborhood” no matter what their background is, perhaps via cross-cultural neighborhood gathering spaces like a local bike shop.
There are some people who believe that it should not be the government’s role to prevent gentrification from happening. Residents were involved in helping the trail to get built, but they were never asked if they consented to give up their homes to provide the trail to wealthier people. If they had that choice, would they choose to stop the beautiful new public trail from being built in order to keep their homes? To echo Ivis Garcia, that is not a choice they should have to make.

Kellen (nee Helen) F. Kiernan is a Chicago lifer who blogs at TrueExpressions.Blogspot.com and can be reached at HelFKiernan@gmail.com.