Homeless: A Day in the Life 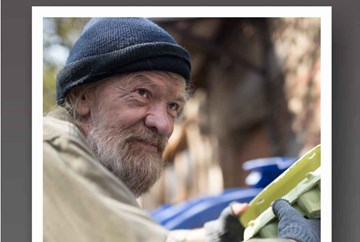 Todd Murphy writes "Homeless: A Day In The Life" with his own experiences from the street still fresh in his mind. Murphy was homeless for more than two years as a young adult before a friend offered him a spare room and a phone, helping him eventually find a job. Murphy insists that this story is fictional and not autobiographical, but he prefaces the story saying that “nearly everything I write about here was something I experienced myself.” Through the eyes of an unnamed veteran called “our friend,” Murphy shows that perhaps it’s harder than one might think to survive on spare change and leftovers; perhaps homelessness means more than simply not having a home to return to at the end of the day.

Our friend, Murphy’s homeless protagonist, begins his day with the same urges as the majority of adult Americans: in search of a restroom and a hot cup of coffee. Unfortunately, even these simple staples are hard to come by when someone sleeps in a sleeping bag in the park and has only $1.20 to their name. Because restrooms are for paying customers only, our friend starts his morning relieving himself behind a dumpster and searching the streets for a leftover, half-full cup of coffee with someone else’s name on it.

He finds a semi-full Starbucks cup in a trashcan at a bus stop; the original owner of this coffee ordered it black, and while our friend would prefer sugar and cream, this will have to suffice. Our friend has retired the idea of a hot, edible breakfast. Instead, he purchases a banana for 60 cents at the local convenience store, earning himself customer privileges to the microwave and finally getting that prized half-cup of reheated coffee.

Our friend has options to earn money today, but none of those options are savory. He can dig through dumpsters of debris and rotten food and sell any treasures he finds. He can craft a sign from a piece of cardboard and a Sharpie to ask others for a handout. Or he can go from business to business in hopes that someone will hire him, even for a day. He says early on that stealing was never an option to him. Over a period of less than 24 hours, our friend pursues all three options he can morally stomach. He makes $80 from sun-up to sun-down, and considers it a lucky day.

Of course, he knows he will probably not be so lucky tomorrow. Our friend returns to the park long after it’s gotten dark. He is handed a tinfoil “space blanket” by some friendly police officers and warned about the cold night ahead.

Before we even meet our friend, Murphy says, “the homeless are as varied in their ways of life as any other group.” The same can be said of StreetWise vendors.

While not all StreetWise magazine vendors are currently experiencing homelessness, many have faced the same barriers as our friend from Murphy’s story. Before your vendor entered the doors at StreetWise, perhaps they were homeless without a roof. Perhaps they were crashing on a friend’s couch, unsure of where they would sleep tomorrow. Perhaps they slept in a shelter on a cot with 100 other people in a gymnasium. Perhaps they were already stably housed, but didn’t have enough pocket change for a cup of coffee.

Tableaux like Murphy’s underscore the necessity to give people a hand up rather than a hand out. Had StreetWise been an option for our friend on the West Coast, life wouldn’t have been easy by any means, but it could have been more comfortable and dignified. In a different setting, our friend could have traded in his cardboard signs for magazines and his bowl of change for a green apron. He could have a guaranteed hot meal and cup of fresh coffee without spending a dime in the StreetWise office, and he could access a restroom with a locking door instead of hoping for privacy behind a dumpster.

When “our friend” becomes “our vendor,” the question “how will I make money today” quickly becomes rhetorical. There is no garbage to sift through, no clever signs to craft, and no dignity sacrificed to beg. There are only magazines to sell. The friend Murphy introduced is determined, responsible for budgeting, and a good conversationalist—all the makings for a successful StreetWise vendor.