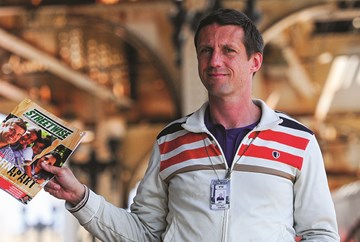 Downtown Chicago streets are so empty the only thing missing is tumbleweed, like a ghost town in an old western movie, says StreetWise vendor Keith Hardiman, as fears of coronavirus transmission have led to Gov. J.B. Pritzker’s shelter-in-place order keeping workers home until April 30.

“It’s a trying time,” Hardiman, who sells the magazine at Michigan and Lake Streets, said on March 30 of the 30-day extension of the state and federal order. “I live in a hotel and pay $37 a night -- $1,050 a month. If I miss a night of payment I get put out. Where am I going to go? But I’ve been making it due to the kindness of people.” He has managed his storage bill but is going to let go of his $70-a-month phone.

Hardiman had bought 28 copies of the March 30 edition about U.S. Census efforts in Chicago and had sold two of them the previous night, working from 6 to 9:30 p.m. Customers told him, “this is to help you out” and “we know this [virus] put a damper on your business, but you’re consistent.” Keith misses his customers, saying “if I can bring a smile to them, this too shall pass. Life is too short to be sad. Any day above ground is a good day.” Meanwhile, StreetWise gave vendors laminated placards for their locations. As of April 6, we will go online-only temporarily. We are encouraging vendors to stay off the streets and to promote digital sales.

Hardiman had a run of bad luck during the holiday season.  He had been living with a friend and paying him a portion of rent, except that it turned out the friend never paid the landlord. Both of them were evicted.

He said he was happy to find the West Side hotel, “better than the streets, better than a shelter,” but he would like to find a studio apartment for $500 or $600, possibly in a near western suburb, “and work my way up.” He also has a regular job at the StreetWise offices on Wednesdays and Saturdays.

“Most of the StreetWise vendors rely on the street-level sales as their primary source of income to pay rent, buy food, and pay for transportation and utilities” said StreetWise Executive Director Julie Youngquist. "To bridge the widening income gap brought on by this pandemic, StreetWise launched a fundraising effort to provide emergency funds to vendors.  We began distributing subsidies two weeks ago, and these funds have been a welcome source of relief.”

Vendor Donald Morris had last sold the magazine on March 16 in downtown Evanston; he sold 120 of 150 copies of the issue about travel tips from other street paper vendors around the world. Since then he had been staying with his 80-year-old sister, whom he had just gotten into a nursing home and who did NOT have the coronavirus, as far as he knew.

Morris, who is a Vietnam-era veteran, gets some benefits plus Social Security payments and spends one-third of his income on rent for a Northwest Side apartment. His plan for the next month will be to spend just a short time daily selling the magazine.

“I don’t want to stay on these streets too long,” he said of his plans for the next month. “It’s best to do a little, like two hours, if you can sell 10 magazines and go home. It’s about being focused on what you can have, not being dependent on the next person. If you can help someone, you do. Until April 30 nobody is going to be walking up and down the streets. It’s going to be terrible but I ain’t going to worry about it. It’s not going to do no good to have an opinion. To get the coronavirus would not be good.”

John Hagan sells StreetWise magazine downtown weekdays at Pret A Manger at Adams and Franklin Streets; then at Leland and Lincoln in Lincoln Square on Saturdays and Sundays and at Old St. Patrick's Church. Yes, it’s seven days a week for him because “sitting at home won’t pay the bills, you don’t accomplish anything by staying at home.”

However, the downtown traffic is gone, along with that at the church. Lincoln Square is the only place where people are regularly coming out. “It might take a week to make what I used to make in one day.”

“There are a few people who may not buy the magazine and one gave me a $50 bill and another a $20 bill because they feel bad for my circumstances,” Hagan said. “That takes care of it right now, although if it lasts longer than May it will hurt.” Hagan’s circumstances are partly offset by his job as a StreetWise field supervisor. He handles orientation of new vendors on Tuesdays and works on recruiting: posting signs about the vendor program at food pantries, branch libraries and SRO hotels.

Merv Sims has been a StreetWise vendor almost since the magazine’s inception 28 years ago. He lives in an SRO downtown and sells weekdays at Starbucks, 303 W. Madison St.; at Old Saint Mary’s Church Saturday and Sunday mornings and at Old St. Patrick’s Church Sunday evening masses not covered by Hagan.

All of this traffic has dried up during the pandemic. “It feels like 2 o’clock in the morning,” Sims said. ”In like two or three hours, maybe 50 people pass while in the old days it was like thousands.” However, he’s noticed it’s still roughly the same 1 in 30 ratio of people who buy the magazine to overall people on the street.

“In the last two weeks since the governor put that order in, it’s been very hard to get anything to eat,” Sims said. He’s taken to eating once a day.

A. Allen sold the magazine to people on their way to work weekdays at Chicago Avenue and Franklin Street but since Pritzker’s order, most of his customers told him they would be working from home. StreetWise has given  vendors laminated posters to put on public property so that their regular customers know they can still help them through Venmo payments and digital subscriptions and Allen has texted this information to those for whom he had phone numbers.

“The good thing about the coronavirus is that it caused StreetWise to be creative,” Allen said. “No touching the paper, no touching the customer. Customers are saying send them this info and they will forward it to their friends – so these are new customers we never would have had.”

Customers who normally buy the magazine via Venmo have been very generous too and Allen said he thanks them as well as subscribers. Like Hagan, he is a field supervisor, who does the Thursday vendor orientations. With his salary and the adjustment from StreetWise, “I am able to survive without going under.”

Venmo attracted millennials to the magazine, said Lester Cherry, and online subscriptions via Issuu are going to be a new twist. “When you’re trying something new, people get jealous.”

Cherry received his degree in general business from East West University 15 years ago and held regular jobs, but continued to sell StreetWise magazine afterhours. He had been selling Master Cards for U.S. Bank at Mariano stores around the Chicago region but the customer contact that required – getting name, Social Security number and other personal information -- put an end to it March 16. He is now selling StreetWise at the Whole Foods on Columbus and Illinois Streets.

Midday and evenings tend to be when people frequent the store, but not mornings, he said. It’s a good thing, since Cherry commutes from Hoffman Estates, where he lives with his brother and his wife. It takes him 90 minutes by bus from Schaumburg and then the Blue Line downtown.

He’s placed himself on the corner in front of Whole Foods, with six feet around him in every direction. “At a street corner you can get a lot more playing room. I am a salesman at heart so this is a good challenge.”