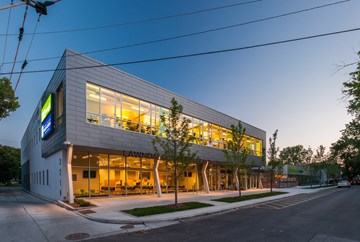 More than 1,500 community developers, architects, business leaders, neighborhood advocates and elected officials came together on February 28 for the 23rd Annual Chicago Neighborhood Development Awards (CNDA), where nine organizations were honored for their achievements in community development and architectural design.

The ceremony, organized by Local Initiatives Support Corporation (LISC) Chicago, is a rare occasion in which all of the contributors to neighborhood redevelopment – community organizers, real estate developers, architects, bankers, residents, foundation and corporate leaders, elected officials and others – are in the same room to recognize and celebrate Chicago’s top real estate development and architectural design projects in the city’s neighborhoods.

“For more than two decades the Chicago Neighborhood Development Awards and the Richard H. Driehaus Foundation Award for Architectural Excellence in Community Design have celebrated Chicago’s neighborhoods while honoring and recognizing the outstanding achievement in neighborhood real estate development, community engagement, neighborhood planning, and building stronger and healthier communities,” said LISC Chicago Executive Director Meghan Harte. “Community development by definition is neither easy or fast, but the people and organizations who do this work in our neighborhoods have succeeded in making progress. It is our neighborhoods that provide the flavors and texture that make Chicago unique. At CNDA, we stop briefly to recognize and celebrate individual achievements and the communities that together we have created by design.”

In addition, this year marked the 20th Anniversary of the Richard H. Driehaus Foundation Award for Architectural Excellence in Community Design.

During the ceremony CNDA presented six community development awards, three Richard H. Driehaus Foundation Awards for Architectural Excellence in Community Design and two awards for personal achievement to individuals. All award submissions were extensively reviewed by teams of judges. The 2017 CNDA honorees are:

The Chicago Community Trust Outstanding Community Plan Award. Recognizes the development and successful implementation of a community plan or strategy within Cook County that improves quality-of-life or addresses a specific need, opportunity or issue through a comprehensive planning and implementation model.

Winner: Near North Unity Program for Near North Quality-of-Life and Design Guidelines.

The Richard H. Driehaus Foundation for Outstanding Non-Profit Neighborhood Real Estate Project Award. Recognizes a community development corporation for a specific real estate project that has contributed significantly to the enhancement of the community.

The Polk Bros. Foundation Affordable Rental Housing Preservation Award. Recognizes a for-profit or non-profit developer for a real estate project that has preserved affordable rental housing at risk because of expired subsidy contracts or physical deterioration.

The Outstanding For-Profit Neighborhood Real Estate Project Award. Recognizes a for-profit developer for a specific real estate project that has contributed significantly to the enhancement of a community.

The Woods Fund Chicago Power of Community Award. Recognizes the value of community organizing, community engagement and advocacy as important and effective ways to transform neighborhoods or empower communities that have experienced significant social or economic inequities.

The Blue Cross and Blue Shield of Illinois Healthy Community Award. Recognizes a successful community-based effort to address the health of a low-to-moderate income neighborhood in the Chicago metropolitan area through creative and collaborative strategies.

The winners for the Richard H. Driehaus Foundation Award for Architectural Excellence in Community Design are:

Awards were also given to Raven Smith 7 and Thomas H. Beeby for their contributions in service and leadership in Chicago. Smith, founder of Straight From The Go, was honored with the PrivateBank Norman Bobins Leadership Award as an emerging leader. Beeby, of HBRA Architects, has chaired the jury that selects the winners of the Richard H. Driehaus Award for Architectural Excellence in Community Design for the last 20 years, and was recognized for lifetime achievement with the Richard M. Daley Friend of the Neighborhoods Award.