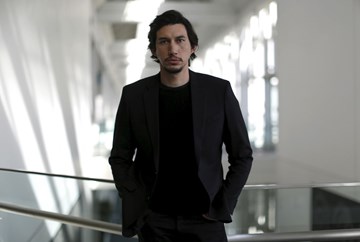 His spectacularly understated performance in Jim Jarmusch’s Paterson means all eyes eagerly anticipated his next role in Silence, from another directing great: Martin Scorsese. With Silence at the start of the year and Star Wars: Episode VIII in December, Driver will be a dominant face of 2017.

We’re in a belligerently garish Mayfair hotel in London where Adam Driver – tall, lean, floppy of hair, d’Artagnan of beard – is dressed in sombre greys and blacks. Driver, a self-confessed patriot – he joined the marines in the days following 9/11 for, in his own words, “revenge” – refuses to have an opinion on the newly elected president. “I don’t think anything that I would say about politics is really going to move the needle either way,” he says.

I suggest that America, from the outside, currently appears to be having some sort of collective breakdown. “Do you think America specifically is having a breakdown?” he asks back. “I think the whole world seems to have lost its mind. Not only with this election but what’s going on everywhere. It’s very nerve-wracking at this time in American politics.”

It seems the patriotism that propelled him into the military at 18 exists in the abstract rather than the specific. “I joined post-September 11 to very much get retribution and, I guess, revenge in a way,” he explains of his very emotive recruitment. “But then I was so surprised that once you are in, those thoughts are gone. Whatever political ambitions you have – or reasons for joining – are gone once you are in your platoon of people and it’s really about the people that you are with. The outside world is the outside world.”

He served for two years and eight months, being discharged after a biking injury, having seen no field service. Emotions were running high at the time but it appears with distance that he understands the warnings inherent in Samuel Johnson’s line about patriotism being the last refuge of a scoundrel.

“Sure, it can be,” he says. “But there is nothing wrong with being proud of the country you are from. But when it starts going into this jingoistic mind-set [it’s a problem]; that this is the only way and that anyone who doesn’t feel the same way that we do should be persecuted. It is more nuanced than just blanket patriotism. It was definitely naive in that making emotional responses isn’t maybe the best idea.”

There is an argument that there are two topics you should never discuss with anyone. Politics is one; religion is the other. Which is somewhat inconvenient as Silence is about two 17th-century Jesuit priests (Driver plays one, Andrew Garfield plays the other) travelling from Lisbon to Japan via Macau to search for their mentor (Liam Neeson) who is rumored to have renounced his faith in light of the Japanese government’s purging of Christians.

Driver himself grew up in a religious family but has not followed the faith in adulthood. “It was helpful in that I had a knowledge of the stories we were talking about,” he says of that background. “I knew about St. Peter, who I wanted to base my character on, as I liked him the most. Even though the boundaries are the 17th-century priests, it really could be a substitute for anything. What I feel the movie is mostly about is the crisis of faith and how [the lead characters] all individually deal with that. You can relate to that even without religion.”

He says that Scorsese, perhaps more than the script, was the draw for him, with the director developing this project for close to 30 years. Driver has already worked with some of the most revered directors in Hollywood – JJ Abrams, the Coen brothers, Terry Gilliam – and lists Pedro Almodóvar and Michael Haneke among the names he would like to work with in the future.

“It is a director’s medium and I am really interested in working with really great directors,” he says of his projects. “That is my only game plan. The director is the first thing that interests me.”

That said, he has no plans to move into direction or production himself, preferring to work in front of the camera. “Producing seems like you have to go to more meetings and talk to more people. That kinda sucks. Being a director, you have to be able to articulate what it is about scenes that aren’t working and answer a lot of questions. I have also met lots of great directors and I don’t see the world that they do, so that’s fine.”

Equally, he feels the scrutiny that comes with celebrity memoirs is something he is keen to avoid. I mention the hullabaloo that followed the publication of "Not That Kind of Girl" by Lena Dunham (creator of Girls, in which Driver plays the unstable Adam Sackler) and he sighs.

“I have no interest in writing a memoir and it has nothing to do with [the controversy]. Lena’s memoir didn’t scare me off. Just writing words on a page scares me off. I don’t think anyone would be interested in hearing [about me] or anything that I would necessarily want to share.”

His leap into the Hollywood super-league came last year with the release of The Force Awakens, the first in the latest batch of Star Wars films, in which he plays the malevolent Kylo Ren. Did he feel pressure to get these films right as the prequel triptych was, frankly, rubbish? “Because of the scale of Star Wars and the fact a lot of people would see it, there is always that pressure,” he says.

I ask him how it feels to break the hearts of millions of people of a certain age as he will forever be known as the man who, in an Oedipal fury, killed Han Solo. “A lot of friends’ kids just didn’t understand why I did that,” he says of the film’s most shocking moment. “But it was more fun keeping the secret. I didn’t even tell my wife what was happening. Watching people respond to it in the theatre was a fun thing to be part of.”

He will appear in the franchise’s next installment at the end of 2017. I propose, now his character’s blood lust is high, he focuses his efforts on killing all the annoying characters, starting with C3-PO and Jar Jar Binks. It elicits his only real belly laugh of the afternoon. “HAH HAH!” he roars. “No!”

We end by discussing if – in a year lacerated by shocking celebrity deaths, political upheavals, war, a refugee crisis and ecological chaos – he can, to back-reference Star Wars, find anything positive amid the darkness.

“In the political world it can be very depressing but people have to actively search for hope in the midst of something that looks very hopeless or bleak,” he says. “It’s terrible but I feel like I still have faith in my country that we will actively find a way to adapt.”

To make America great again, to coin a phrase?

He laughs a parched laugh. “I am not coining any of those phrases.”