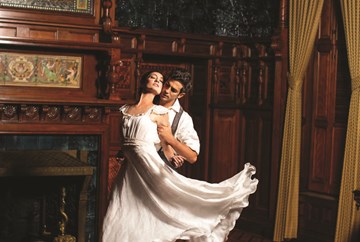 From words upon a page to a stage, Joffrey Ballet performed its world premiere of “Anna Karenina” on February 13. The Joffrey Ballet is a world class, Chicago-based ballet company, whose performances always seem to amaze their viewers, equally during this production. “Anna Karenina” is considered one of the greatest novels ever written. It dives deep into the life of Anna, a young sophisticated woman who longs for love. As a result of a complicated and lonely marriage, she begins an affair with Vronsky, but complications begin to infringe upon the relationship. While Anna is already married with a son to Karenin, Vronsky has an admirer, Princess Kitty Scherbatskaya. Kitty has her eyes set on Vronsky and is in despair when Vronsky is obviously distracted by Anna. The entanglement and disconnection between individuals erupts into a dramatic and enticing performance.

The performance quite literally brought to life the novel of “Anna Karenina.” Through the use of a projection and multiple mesh screens through backdrops, the Joffrey Ballet was able to achieve a fully three-dimensional experience. It left me feeling confused as to what was real and what was fake, enticing and pulling me into the magnificent performance of the dancers. It was truly breathtaking, how the company was able to produce such a simplistic yet enriched atmosphere as an environment for the dancers throughout the first act.

During the second half of the performance, the backdrops and the overall performance felt more alive. I was more intrigued and pulled into the performance than during the first half. The beginning, while yes, was engaging, had a very classical and traditional vibe. However, most of this sense was lost during the second half and was replaced with a more contemporary appearance. During one of the scenes from the second half, the stage was decorated with white drapes hanging from the ceiling. A fan created waves and ripples in the drapes that mirrored the dancers’ movements, creating a sense of unity. The white background was a refreshing choice, compared to the dark and mysterious backdrops that decorated most of the first act.

The costumes were gorgeous. Black dresses that looked simple and usual to the naked eye, displayed bright colors underneath with every twirl and jump. Pops of red, green and pink spun across the stage, enhancing each movement, reeling in viewers due the peeks of lavish tulle. They were the complete opposite of elaborate dresses, free of excess decoration. Through this technique dancers were able to bring forth the vulnerability and rawness of the characters. The simplistic costumes not only allowed for viewers’ eyes to solely focus upon the dancers’ movements and emotions they were trying to convey, but allowed viewers to fully dive into the scene upfolding.

Overall, the Joffrey Ballet produced a wonderful performance that left me wanting more. The elaborate staging and the exquisite dancing exceeded any sort of expectations I had previously envisioned. “Anna Karenina” continues until February 24.