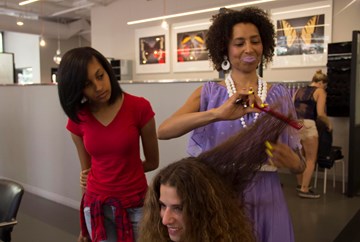 This summer Evanston teens will be completing work such as assisting hair stylists, helping repair luxury cars and learning to make macaroons alongside bakers through apprenticeships intended to support high school students interested in pursuing vocational and trade careers, rather than four-year college.

With total U.S. student loan debt surpassing $1.4 trillion according to the Federal Reserve, local high school students are considering pursuing vocational school or community college to lessen their debt burden and capitalize on potential job growth, with the majority of new jobs in 2020 not requiring a bachelor’s degree.

“Four-year college is not the only solution to success,” said Nancy Baker, Executive Director for the Evanston Work Ethic Program (WE). “So many kids have drunk the college-only Kool-Aid, so we’re here to change the conversation and to say college is an amazing thing, but it’s not for everyone.”

Eight Evanston Township High School students are participating in the first cohort of the WE Program, which provides opportunities to students planning to enroll in an accredited vocational or technical program after graduation in fields such as automotive technology, cosmetology, culinary arts, healthcare, manufacturing, technology and transportation. Students benefit from mentorship, career readiness seminars and paid apprenticeships throughout their junior and senior years. Upon graduation, students will be eligible for $500 stipends to be applied to the vocational program or community college of their choice.

“There just shouldn’t be any stigma with the choice of whether or not to go to college,” said WE mentor Jason Saini, manager at Greenwood Motorsports. “There’s some really good, well-paying careers that can be had without a college education. There’s no shame in that game.”

The program works to expose students to highly-skilled trade or middle-skill jobs that require some college or training but not four-year degrees. Students in the program have career aspirations such as pastry chef, computer programmer and pharmacy technician.

“When we come in and we say we’re here to help students get placed into high-paying, in-demand middle-skill level jobs, people don’t necessarily understand it or want to hear that message,” Baker said. “They want to hear the ‘college is for everyone’ message that has been widely accepted as the politically correct but incredibly inaccurate message.”

While the U.S. Census Bureau announced in March 2017 that the country’s adult population has reached its highest levels of educational attainment since 1940s, the majority of U.S. adults do not possess a four-year degree. The number of adults holding a bachelor’s degree falls around one-third of the population.

“We’re very focused on four-year college everywhere in the country, particularly maybe in Evanston. So, we’ve really been interested in this issue and presenting young people with the different options there are for a successful life,” said Marybeth Schroeder, Vice President for Programs at the Evanston Community Foundation. “We want for every young person to find a career that is more than just a job, something they can really be involved in, but everyone doesn’t have to walk down the same path.”

The Evanston Work Ethic Program was founded by Hecky Powell, owner of Hecky’s Barbeque and creator of the Forrest E. Powell Foundation. In its efforts to support students interested in vocational careers, the foundation provided high-achieving Evanston Township High School students with scholarships. However, the foundation leadership felt the program lacked relationships with the scholarship recipients, some of whom they were unsure would attend trade schools or pursue vocational work.

Powell and Baker developed the WE program to better support students over two years by utilizing best practices such as workshops and mentorship from programs like Evanston Scholars, which supports college access for primarily first-generation, low-income students of color, and applying those practices toward supporting students interested in vocational careers.

“The high school, and most schools, they’re pushing these kids to go to college and not everyone’s meant to,” Powell said. “We need plumbers. We need electricians, programmers. We need beauticians and all that kind of stuff.”

The Georgetown University Center on Education and the Workforce’s report, Recovery: Job Growth and Education Requirements Through 2020, predicts 55 million new jobs will be created by 2020. The report anticipates that only 35 percent of those jobs will require a bachelor’s degree.

“I know my dad wants me to go to college so bad, and he did not like the idea of this program at first. He just said 'I feel like they’re telling you not to go to college,' but I kind of said that’s not the point. They’re not trying to tell you don’t ever go to college, but there’s an easier way,” said WE student Saniet Rander. “Why go to college if you’re not going to go for something you actually want to do? It’s like wasting your money instead of coming here, going to a trade school and doing something you probably will enjoy and make more off of it.”

Rander is spending her summer working at Art + Science salon in Evanston, where her mentor, Yeefah Thurman, is a master hair artist. In addition to helping clean the salon and greeting clients, Rander will also experience workshops and hair shows. Thurman says Rander will be exposed to a diverse group of talented stylists who work on photoshoots for magazines, provide creative direction for hair styling product brands and make wigs for Chicago productions.

“If I didn’t know about this program, I probably would not know what to do right now or where I want to go,” Rander said. “But since I started the program, I definitely have two directions that I can go toward.”

Rander also enjoys working with children and holds another job working at a summer camp. She is interested in possibly attending cosmetology school, then eventually pursuing a business degree in order to open her own salon or daycare business.

“There’s unlimited ceiling to what you can do,” Thurman said. “If she decides not to become a hair stylist, I think there’s so many things you learn from this industry about interacting with people.”

Rander’s classmate, Shaun Dornbierer, became interested in working in the automotive industry through classes he took in the high school’s auto technology training program. When he graduates next year, Dornbierer expects to attend trade school or continue working in the auto industry. This summer he’s working at Greenwood Motorsports with his mentor, Jason Saini.

“Over the summer, I’ll just be involved in all sorts of different things, and just from that experience, I’ll be learning, and that’s all I hope for,” he said. “There is a lot of pressure - a lot of people go to college – but I don’t feel it personally.”

Dornbierer will be exposed to work on a variety of cars, including luxury vehicles, through his apprenticeship. Saini stresses the need for mechanics and other workers in the automotive industry. Those interested in the industry can start work after high school or attend trade schools for up to two years, even specializing in specific car brands.

“Sometimes you have to start by sweeping the shop up, but you can get opportunities at smaller independent shops, and it’s something you can start working at right away,” Saini said. “There’s a demand out there. People are needed.”

Gina Figura became a baker at Bennison’s Bakery after attending the culinary school, Kendall College, and participating in an internship at the popular shop. She is mentoring program participant Hannah Seiler, who aspires to become a pastry chef.

“I would’ve actually liked something like this. It shows kids in high school like what they’re going into almost,” Figura said. “Because they have this program, they’re really going to see if this is something they really want to do in life and go from there. I think that’s incredible.”

Seiler would also like to attend Kendall College but is concerned about affordability. As she looks to next year, she is considering attending community college after graduation.

“ETHS is really four-year college orientated, but I’ve gotten a lot of support from my counselor and teachers and such, so I haven’t really felt any pressure to go into a four-year,” Seiler said.

WE student Avontay Coleman appreciates the value of a two-year degree from family experience. His uncle attended a four-year college, accumulated debt, then went back to Oakton Community College for a two-year degree that served him better in his career.

“I just want to get as much experience as I can to kind of get the feel of what it takes to work in the area,” said Coleman, who wants to be a computer programmer. “In my mind, I’m like I’m just going to go for the cheapest route, but at the same time, I’m getting more experience than most of the people going to a four-year college because I doubt most of them are in high school getting their apprenticeship in computer programming.”

Coleman will be fixing ChromeBooks at the high school and working with his mentor at the AllState Arena for his apprenticeship this summer.

From 2011 to 2013, the Evanston Community Foundation supported the Evanston150 initiative, in which community members generated more than 2,000 ideas for improvement in Evanston. Providing opportunities for youth in career and technical education was identified as a top priority for the community.

“WE is a piece of that puzzle, I think, to provide some added incentive and some added support for young people who are exploring these career pathways, and they’re building this in a really methodical way,” Schroeder said. “I think there can be nothing but good from this. I think the more that we have options for all young people to really see themselves making a career plan and getting the training or education for that, I think it’s a really great addition to the landscape here in Evanston.”

Kevin Brown, Community Services Manager for Evanston’s Parks & Recreation department, estimates the city has 2,000-3,000 young people ages 16-24 considered to be at-risk youth whom he thinks could particularly benefit from a program like WE.

“I think if you go to a high school where the culture is you have to go to a four-year college to be successful, now we have a program that’s telling people, 'yes, we value success as well, but there’s a different path and a different route, and you don’t have to be one or the other,'" Brown said. “But to give these kids an additional option for a success pathway is a very positive thing.”

The WE program hopes to double the number of participants for the coming year. Eventually, the program could ideally be applied to other schools, Baker said.

“We think that it’s very scalable,” she said. “We think that there are a lot of high schools that could use this kind of fresh thinking.”

In addition to introducing students to career opportunities, the WE program is focused on changing the community conversation surrounding opportunities after high school.

“It’s started to change the narrative right now. I’m noticing it in the community,” Powell said. “The community is buying into it.”