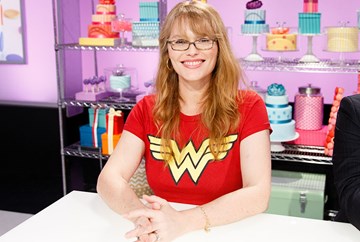 Nicola Scott has been diligently toiling away in her Sydney home office for the better part of a decade, putting pencil to paper and bringing to life some of the world’s biggest superheroes.

Her work for DC Comics, one of America’s largest and oldest comic book publishers, has meant she’s personally applied brushstrokes to titles such as Star Wars and Superman. But it was early last year while working on her own comic book, Black Magick, that she received the phone call she’d been waiting for – it was Wonder Woman.

Raised in a household that included a mother and grandmother who painted, Nicola gravitated towards the dramatic arts. “My passion was acting, but it was a career that wasn’t going anywhere. I needed to find something else creative to do as a career path.”

Scott decided she would draw for a living. “I was sitting at home going, 'if I had to draw the same thing over and over again every day what would I want to draw?' And straight away I thought of Wonder Woman. I grew up on the Wonder Woman TV show. I loved her and I never quite grew out of it. As soon as the thought occurred to me, I realized someone somewhere has that job. There’s a whole industry and that’s exactly what I should be doing.

“It was a huge leap of faith. I sold my car and moved out of my expensive apartment and into a share house because this was a mission. I knew I was starting from point zero. Within 4 1/2 years – which I thought was a pretty decent apprenticeship – I started working at DC Comics, the home of Wonder Woman.”

Scott worked on a number of DC titles, including Birds of Prey, Earth 2 and Teen Titans. She can still remember when the call came.

“I was in the middle of a painting for Black Magick and Greg Rucka [DC comics writer] was like, ‘We got a call from DC to come and bring Wonder Woman back. We need to start focusing on this right now because our first issue is due at the printers in seven weeks!’ It was very all of a sudden,” she says.

As for bringing Wonder Woman to the big screen, she feels the time is now right. In fact her Twitter activity has recently been dominated by #Countdown2WonderWoman: an exciting countdown to the release of the movie. It has been a long time coming.

“I was 4 or 5 when the TV show started playing, so the perfect age to be star struck. And Lynda Carter was unbelievable. I look at her now and think, how is she even a real person? She’s crazy beautiful. And even though she’s essentially wearing a satin bathing suit she never played the character as sexy. It wasn’t titillating,” says Scott, who was “disappointed” at the UN’s decision to revoke Wonder Woman’s ambassadorship for empowering girls and women.

And with that, our phone call ended, the illustrator from Sydney went back to doing the best job in the universe: bringing Wonder Woman to life.