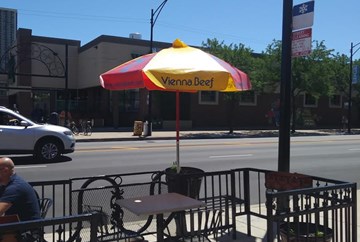 John Hagan leaves his South Shore apartment just after 5 a.m. most days, ready to put in another 18-hour day. He makes it to his downtown spot at Wabash and Wells just in time to catch the morning rush. He sells his magazines for a few hours to put some cash in his pocket, before switching into his role as a field supervisor. John travels to all parts of the city to offer tips to new recruits and spreads the StreetWise word whenever he sees an opportunity.

This is all before 11 a.m., and John has now been up for nearly seven hours. Any breakfast he was able to grab on his early morning commute has long been metabolized, and it’s time to refuel.

This time, John chose Patio Beef in Edgewater. “I’ve been there before,” John said, “and I remember really liking the food, so I thought I’d go back.”

He approached the counter and put in his order for an old classic: a double cheeseburger, fries, and a Diet Pepsi. But anyone who knows John knows that onions are his kryptonite. “I got everything on my cheeseburger except onion,” John said. “To me, onions always kill the flavor on a hamburger or a cheeseburger.”

If you can’t tell that John is a bit of a connoisseur when it comes to burgers and fries, then just listen to him talk about fries.

“The fries were your typical, regular, every day fries,” he started out saying. “But every time I’ve been to Patio Beef, they’ve always made sure the fries are hot—that way they’re fresh and have more of a taste to them. I try to avoid salt and pepper, but I put ketchup on my fries every now and then. I don’t always use ketchup because I don’t like to get my hands all messy, and sometimes you don’t need it. I think that sometimes when the fries are straight out of the fryer, it’s better to not put ketchup on it because the ketchup starts to cool the fries immediately, and the hotter the fries, the better they taste.”

John recognizes that maybe not everyone values the burger and fries staple as much as he does, but he says that shouldn’t stop people from going in and giving it a try. “A good reason to try it out is because they have all varieties of meals,” he said. “They have hamburgers, hotdogs, gyros, chicken, hot tamales, and pizza puffs. There’s something for everybody.”

John thought through the rest of his day as he was eating. He had a meeting scheduled at the StreetWise office that he didn’t want to miss; he needed to stay on the North Side near his spot in Lincoln Square until after the evening rush hour ended so he could make some extra money; and then he would need to make the long commute home to South Shore. It didn’t take long for John to realize that he wouldn’t be getting much rest today, so he took advantage of Patio Beef’s air conditioning and TV while he could.