Pro-Abortion League on the election 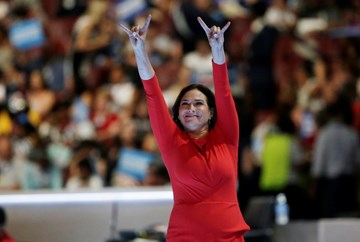 Before a national television audience, Ilyse Hogue took the stage on the third night of the 2016 Democratic National Convention and did the unthinkable - she spoke publicly about her abortion.

A fourth-generation Texan and respected progressive activist, Hogue took the helm at NARAL Pro-Choice America after working as a senior adviser at Media Matters for America, a nonprofit dedicated to monitoring, analyzing and correcting conservative misinformation in the media. She has also held senior positions at Rainforest Action Network and MoveOn.org.

As president at NARAL Pro-Choice America, Hogue, 47, oversees a national organization with affiliates in 22 states striving to protect and advance women's reproductive freedom through political action including lobbying and advocacy. Emily Green of Street Roots, the street paper in Portland, OR, spoke with Hogue in advance of her keynote address at NARAL Pro-Choice Oregon's annual fundraiser in Portland.

Emily Green: What factored into your decision to reveal something so personal and so stigmatized on national television?

Ilyse Hogue: What motivated me was pretty simple: The stakes are high - higher than they've ever been in my lifetime. It felt like a time to say to the country, "I will not be ashamed by sharing my real life experience" and demanding that we elect people into office who will work to create policy that reflects the lived experience of so many women in this country.

E.G.: What has the response been?

I.H.: Overwhelmingly wonderful and reaffirming. My existence, since I took this job, generates negative response on a daily basis, so of course that was present, but actually not more than usual. The small but very, very vocal extremists on the other side were definitely drowned out in the wake of my speech by the number of people who thanked me and supported me online for putting myself out there.

The thing that made it all feel worth it was the following week, when a young woman posted on a very popular mom's blog, called "Scary Mommy," her own story about her own abortion experience and in that said that she was motivated by my speech. But she also came out as a pro-choice Republican who had been living in shame for years because of what she was taught to believe, and that she no longer wanted to live in shame.

E.G.: In the 43 years since Roe v. Wade recognized a woman's constitutional right to obtain an abortion, has this right ever been more in jeopardy?

I.H.:  We're at the zenith of what the anti-choice movement has - the strategy that they've been employing for four decades since Roe v. Wade passed. They have been thinking about nothing else but repealing those rights ever since, and they've done a very good job, objectively, of employing a long-term strategy that allowed them to take over state legislatures and help re-district so Congress reflects the minority opinion that they are. And they've worked really hard to get judges elected.

We've got a presidential election where not only do we have one side of the equation outlawing all of the advances, specifically abortion access and rights to make our own decisions, but also just misogyny - just running on the idea that women are inferior.

So, you've got that ticket, and then you've got the [presidential election] winner being able to choose a number of Supreme Court justices, most likely, in the coming years. Therefore, we've got a convergence of opportunity and crisis.

E.G.: Speaking of the election, Trump's running mate, Mike Pence, is a staunch opponent of women's reproductive freedom. If he does get into the White House, do you think it could actually mean a reversal of Roe v. Wade?

I.H.: I do. I think Trump has certainly said that Pence would be the most powerful vice president ever when it comes to these issues, and Pence has done everything Trump has said he wanted to do.

Trump said he wanted to defund Planned Parenthood. Pence has done it (in Indiana).

Trump said that he would punish women who had abortions. Purvi Patel [was convicted of feticide and sentenced to 20 years in prison] on Pence's watch in Indiana for having a home abortion.

Trump has said he would punish doctors. Mike Pence, as governor of Indiana, has signed into law one of the most extreme bills ever that could send doctors to jail for performing certain abortions.

E.G.: What are examples of the most limiting pro-life legislation?

I.H.: We've seen, in a couple different states including Indiana and Texas, these laws that demand women who choose to terminate pregnancies must provide burial for the fetuses. These laws are, in practice, impossible to actually implement and serve no purpose other than to try and shame women from making the decision and to create a sense of personhood around the fetus, which has been a long-term goal for the anti-choice movement.

E.G.: What has been the effect of these laws in Indiana? Have abortions gone down?

I.H.: In Indiana, Mike Pence overseeing the defunding of Planned Parenthood and the closure of the rural clinics has actually resulted in really, really terrible health outcomes: HIV rates are up and maternal outcomes are down, which means women who are carrying pregnancies to term are faring more poorly.

We do know from data globally that everywhere abortion is illegal or difficult to obtain, the number of abortions doesn't go down, but the number of injuries and deaths of women go up. In Texas in the years after those clinics were being shut down the number of women who tried to self-abort because they couldn't get to a clinic spiked to 7 percent, where the national average is like 2 percent. In very rural parts of Texas, like the Rio Grande Valley, that were particularly hard hit, that number went up to 12 percent.

E.G.: With advances in medicine, we are now able to keep a small percentage of babies born at 22 weeks into pregnancy alive outside the womb, although they are likely to have long-term health problems. What does change to fetus viability mean for the abortion debate? [Currently, a fetus is considered viable at 24 weeks.]

I.H.: The fundamental question is: Do we actually entrust women in consultation with medical professionals to do what's best for them, and the answer to me is yes - irrespective of advances in medical technology, because what we know is that when we allow politicians to make those decisions instead of women in conjunction with their doctors, the outcomes are bad.

E.G.: Why does this potential two-week change in viability matter so much to abortion rights opponents when 99 percent of women decide to terminate their pregnancy long before the 22nd week of their pregnancy?

I.H.: I think it's because anti-choice folks know that they've lost the debate on the merits: When women have the option, they terminate pregnancies they're not ready to carry to full term very early in the pregnancy - and most people are just fine with that.

What they have actually done is make it more and more difficult to access abortion early in pregnancy, and then try and change the conversation about what that means later in the pregnancy.