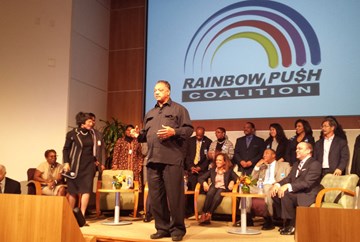 The Rainbow PUSH Coalition will be holding its 46th annual international convention from July 12 to July 15. The theme of this year’s convention is "Protecting, Defending, and Gaining Civil Rights: A More Perfect Union," and the it will feature minister, politician, and civil rights activist Rev. Jesse Jackson.

“These are very tumultuous times in which we live—against that backdrop, where is the civil rights struggle today?” Jackson said. “Fifty years ago, it was about race separation. Today, it’s about resource separation.”

In an attempt to address this resource separation holistically, each day of the conference will have a different focus. On July 12, the topic will be on International Business and Education. On this day, Gov. Bruce Rauner will sign the Illinois Automatic Voter Registration Bill, after which two million people from Illinois will be automatically registered to vote. Illinois will be the ninth state to institute automatic registration.

Throughout the day, there will be a Tech Expo called the Geek Fest. The expo will be in the style of a typical Chicago festival, only the booths will feature technological gadgets and games instead of food. Companies such as Google and Intel will be participating. That evening, scholarships will be awarded to youth for technological education. “Many youth have good minds, but they don’t have technical training. Some of them who go to college graduate with degrees that don’t match the new world challenges, so we’re getting a thousand churches to get at least 30 laptops in their Sunday School spaces and teach children how to code,” Jackson said.

That afternoon, the Ministers’ Luncheon will focus on the church’s role in stopping the countercultural revolution coming out of Washington, D.C. A Sports Banquet Roundtable on “Life Beyond the Playing Field” will take place that night. About this roundtable, Jackson said, “Why do our kids do so well on the athletic field? Because whenever the playing field is even, the rules are public, the goals are clear, the referees are fair, and the schools are transparent, we can make it. That’s not true beyond the ball field.”

On July 14, the focus will be on Women and Healthcare. In the morning, there will be a session led by Richard Cordray from the Consumer Financial Protection Bureau, after which there will be many women’s events, including a Women’s International Luncheon led by U.S. Sen. Elizabeth Warren (D-MA). During this luncheon, Aretha Franklin, among others, will be honored. That night, the Illinois Gubernatorial Forum will take place, during which improvements that could be made to promote jobs and people in inner city Chicago will be discussed.

The last day of the conference will be the 50th anniversary of the first African American mayorial elections. That morning, there will be a National Black and Brown Elected Officials Summit with former Democratic presidential candidate and U.S. senator from Vermont, Bernie Sanders. “I want young black youth to learn to speak Spanish and I want young Latinos to learn to speak English. We’re next-door neighbors, we vote together and live together—we must learn to speak to each other,” Jackson said. The conference will close with LoveFest, a music gathering with a focus on stopping the violence.

The conference will be at the Chicago Hilton. To register for or learn more about the conference, visit www.rainbowpush.org.