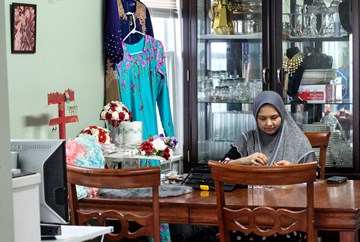 When Aisyah Salamutallah stepped off an airplane onto U.S. soil in October 2016, she was greeted with blast of cold air.

"I really happy," she recalled. After fleeing discrimination in Burma as a child, then living without legal status in Malaysia for more than 30 years, Salamutallah finally found her home in Chicago.

Salamutallah, 39, her husband, and six children are among nearly 1,500 ethnic Rohingya refugees who have resettled in Chicago's West Ridge neighborhood. Her family lives a block from Devon Avenue and its ethnic restaurants, halal grocery stores, bakeries, and women wearing hajibs strolling with children in tow. Salamutallah, like many persecuted Rohingya refugees, came to the U.S. from Malaysia to give her family the chance for an education and a better future.

"Devon Avenue has been the perfect place for them because they can buy the food they want, people look like them and wear the same kind of clothes, and there's a mosque here," said Laura Toffenetti, assistant director of Chicago's Rohingya Culture Center (RCC). The city is now home to one of the largest concentrations of Rohingyas in the U.S.

The Rohingya are a Muslim minority who have lived for centuries in Buddhist-majority Burma, now known as Myanmar. They have faced escalating persecution by government security forces since the country gained independence from Britain in 1948. Hundreds of thousands of Rohingyas have fled their native land after suffering discrimination, forced exodus and genocide. They are a stateless minority, fearing for their lives at home and floating without roots abroad. The United Nations calls the Rohingya, “one of the world's most persecuted minorities."

When she was 4 years old, Salamutallah's family fled Myanmar for Malaysia. In 1982, Burma stripped the Rohingya of citizenship and essential rights. Many, like Salamutallah, lived in Malaysia for decades before gaining refugee status and resettling in the U.S. 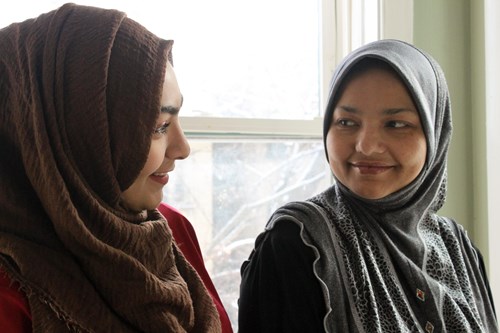 Aisyah Salamutallah with her daughter.

Besides revoking their citizenship, the government denied the minority Rohingya access to education, employment and health care. They seized their homes, shuttered their businesses, and restricted their freedom of movement, according to the United Nations High Commissioner for Refugees (UNHCR). And in August 2017, Myanmar's security forces launched a scorched earth tactic to drive the Rohingya out of the country. The military burned hundreds of villages, committed mass rape, and murdered thousands of civilians, according to Human Rights Watch.

Former Secretary of State Rex Tillerson described the Myanmar military's actions as "ethnic cleansing," and Yanghee Lee, UN special rapporteur to the region, said the crisis bears "all the hallmarks of a genocide."

Since August, as many as 700,000 Rohingya have fled from Myanmar to overcrowded refugee camps just over the border to Cox’s Bazar, Bangladesh, according to The New York Times. While the Rohingya in Bangladesh are free from persecution by Myanmar security forces, they are far from safe; corruption and disease are a constant threat, according to Jewish World Service.

Another Rohingya refugee, Nasir Bin Zakaria, escaped from Myanmar when he was 14 after the military arrested him and forced him into hard labor at a jungle camp. One night while the soldiers were sleeping, he quietly escaped.

After dangerous crossings through Bangladesh and Thailand, Zakaria finally arrived in Malaysia. He lived there illegally and worked construction jobs for 18 years. But after he married and had a daughter he began to worry about the future. His daughter wasn’t eligible for school and the entire family risked going to jail because of their illegal status. Zakaria applied for resettlement with the UNHCR and joined a cousin in Chicago in 2013.

“This is our new life. New country," Zakaria recalls telling his wife after they arrived. "One day my daughter will go to a school here, and my dream is that my daughter is going to be a doctor who can help people all the time."

But Zakaria still has nine brothers in Myanmar and he worries all the time. "Today they are alive, tomorrow I don't know. So no guarantee," he said.

When Zakaria arrived in Chicago he, like other Rohingya refugees, had little education and didn't know how to speak English. His resettlement caseworker helped him find a job as a night dishwasher at Rivers Casino in Des Plaines.

One day, while having tea with a Rohingya friend, Zakaria noticed an envelope with a Department of Human Services logo sticking out of his pocket. His friend didn't recognize the logo, couldn't read the letter, and was hoping to find someone who could help.

Zakaria had a revelation. Many Rohingya had risked their lives escaping Myanmar, spent years navigating their way to America, and now they risked losing essential benefits because they couldn't read their mail. Zakaria recalls telling his friend, "we are to do something."

Zakaria continued to work nights as a dishwasher and days organizing more than 300 Rohingya refugee families in Chicago. With the help of his UNITE HERE Local 1 union organizer Maria Martinez, he connected with the Zakat Foundation of America, an Islamic non-profit, and won its support for a center for the Rohingya community.

“We are Rohingya families here, so if we try to find a space like right now we can use our language, translate, activities, everything," Zakaria said. 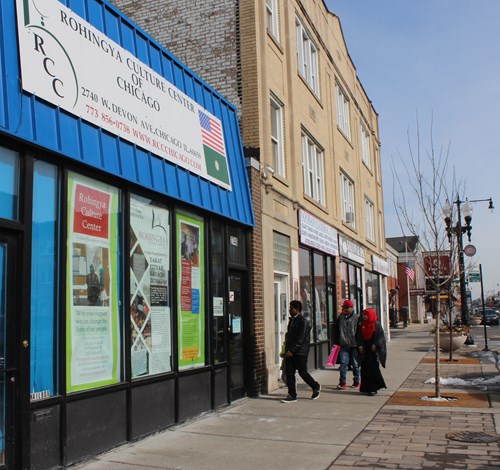 The Rohingya Culture Center opened in April 2016. The modest storefront is a hive of activity seven days a week. In daytime, volunteers teach adult ESL classes and offer translation services to help refugees navigate schools, medical care and government agencies. After school children pour into the center for their daily Quran class, volunteers help them with their homework. On weekends, families gather for special events and workshops.

Support for Chicago’s Rohingya refugees has been overwhelming, said Zakaria, now executive director of the RCC. On a snowy Sunday in February, board members from Islamic Foundation North arrived with donations of winter clothing and gift cards for families with the greatest needs.

Zakaria said the RCC organizes activities to help Chicago Rohingyas assimilate to life in the U.S. and to keep their cultural traditions alive. “We want to remind our kids and our people who we are, where they come from. We must use our language.”

But the situation in Southeast Asia is never far from their minds, Zakaria said. Many Chicago refugees regularly receive pictures of killing and violence, videos and pleas for help from relatives in Myanmar and Bangladesh. “Our bodies are here, our minds are here, but our hearts want to help our innocent people in Burma get freedom and justice.” 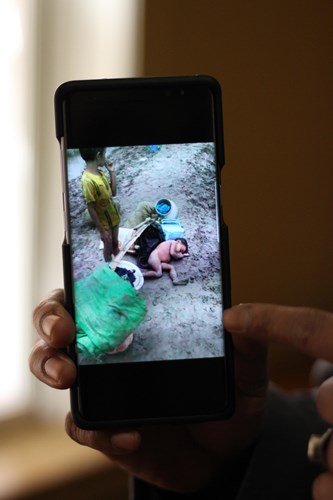 Nasir Zakaria holds an image from Myanmar on his cell phone.

Says Salamutallah, “If I were in their place, oh my God, I don’t know what I would do.”

Part of the RCC's mission is to raise awareness about the grave situation in Myanmar. The center staff has organized demonstrations and raised more than $70,000 sent to Myanmar villages for medicine and food, Toffenetti said.

When U.S. Sen. Senator Richard J. Durbin and U.S. Rep. Jan Schakowsky (both Illinois Democrats) visited the RCC in late 2017, community members asked them to assist the Rohingya in Myanmar and Bangladesh. Both legislators pledged their support, Zakaria said.

Schakowsky, Durbin and a congressional delegation visited Cox’s Bazar, Bangladesh and Myanmar, but Myanmar authorities denied them access to the most devastated areas in northern Rakhine State.

“This human rights tragedy should remind us that even in the twenty-first century the fires of fear and hatred always linger and can never be ignored,” Durbin wrote in Huffington Post.

In his Huffington op ed Durbin demanded that a UN fact-finding mission be allowed in northern Rakhine State, Myanmar military be held responsible for crimes against humanity, the UNHCR monitor an orderly and safe return for Rohingya who choose to return to Myanmar, and Rohingya now residing in the Rakhine State be freed from prison camps and made eligible for citizenship.

Chicago's Rohingya community is grateful for all the national and local support they've received and for the opportunities afforded them in the U.S., Zakaria said.

“We want to build a future for everybody,” he said. “Now we know what it feels like to experience freedom. When you bring refugee people it benefits everyone. We pay taxes. We follow laws. We want to go to school to become lawyers and doctors. This is a chance to change our lives.”

Salamutallah enrolled her children in Chicago public schools, and they are doing well. Zubeda Jafar, 22, her oldest child, hoped to attend college but went to work instead to assist her family. "I'm the oldest of six children and I have to help them," Jafar said. "I want my brothers and sisters to get an education."

Jafar's dream is to get an education and become a businesswoman. She works at a jewelry store on Devon and has launched her own business, Zubeda's Henna Art, which specializes in henna tattoos and makeup for weddings and other events. 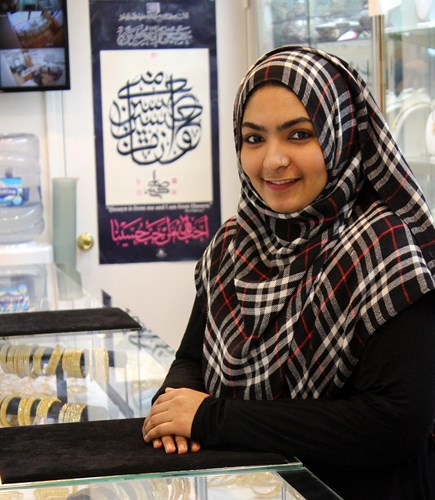 When Jafar was young, her mother taught her how to apply henna tattoos. At 16 she was the henna artist at the shop in Malaysia where her mother sold her handmade beadwork. Both Jafar and Salamutallah would like to open shops in Chicago.

"Maybe I think with my kids already here, when my kids grow up and go to school, they can help the Rohingya," Salamutallah said. "Maybe they can change things."