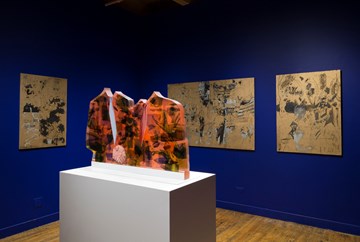 When artist Deb Sokolow created her art piece "Some Concerns About the Candidate," she had no idea how relevant it would be for the 2016 presidential election.

“There is always the potential for a psychopath to be elected to public office,” Sokolow said. “This piece of mine feels like a strange prediction to the future [today].”

Sokolow has no political agenda behind her artwork. Rather, her works focus on the type of personalities that run for office. Sokolow visually displays ‘dark triad traits’ found in political figures here and abroad: narcissism, psychopathy, and machiavellianism.

"Some Concerns About the Candidate" has taken on a new feel alongside the current election, something Sokolow never expected.

Deb Sokolow is hosting “Tactics for Controlling the Minds of Others” on November 4 at the River North, Chicago-based gallery. She will walk guests through the work and discuss the tactics that leaders use to manipulate the minds of others.