The Fair That Made Chicago Famous 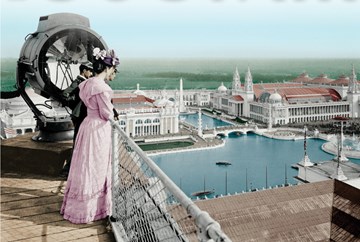 Chicago was the center of the world – and a window to the future – for six months near the end of the 19th century, thanks to the World’s Columbian Exposition of 1893.

“The world’s fair really brought the world to Chicago and brought Chicago to the world,” said Paola Bocciol, project manager for the exhibition, “Opening the Vaults: Wonders of the 1893 World’s Fair,” at the Field Museum through Sept. 7, 2014.

“The fair was a big trade show, the first time Chicago was on the international stage,” Bocciol added. “A lot of companies came here to display what their products were; they were looking for business partners. It was an international event of massive scale for that time, the biggest and most beautiful world’s fair of all time.”
More than 50,000 objects remaining from the fair became the nucleus of the Field Museum collection, although many have not been seen in the 120 years since. After the success of last year’s “Opening the Vaults: Mummies” exhibit, Field officials wanted to do another show of such treasures, Bocciol said during a tour of the World’s Fair exhibit.

Nine months in the planning and execution, “Wonders of the 1893 World’s Fair” manages to evoke some of the titillating excitement fairgoers must have felt at viewing their “modern” era. Besides the 200 objects from the Field collection, interpretative wall tags remind us that the fair came shortly after Charles Darwin’s “Origin of Species” book in 1859, completion of the first trancontinental US railroad in 1869 and the first telephone patent in 1876.

October 9, 1893 was designated as Chicago Day at the World’s Fair, and it set a world record for outdoor event attendance with more than 700,000 fair visitors.

The 1893 World’s Fair was the first time electricity was used on a large scale, to light the classically themed buildings that became known as the “White City.” “For millions of visitors, the electrical illuminations of the fair were a source of wonder and excitement about the possibilities of illuminating America’s farms and cities,” Robert W. Rydell wrote in an essay for the online “Encyclopedia of Chicago.”

The fair was also important to Chicago’s image, coming just 22 years after the city was destroyed by the Fire of 1871, Rydell noted. The Chicago business community matched the $15 million pledged by the New York contingent and added $5 million in stock subscriptions from ordinary people. The U.S. Congress voted in Chicago’s favor after a banker raised several million within 24 hours.

Among the first objects in the Field Museum exhibit are the 4-foot-wide ledger for the $46 million fair (equivalent to $1.2 billion today) and the life-size papier mache octopus and giant squid that hung overhead in the fair’s Anthropological Building. Most fairgoers would never travel enough to witness animal diversity, so we also get to see skeletons of a mako shark, a golden eagle on a perch, a tortoise, a howler monkey.

Likewise, science was moving fast enough in the 1890s that the one dinosaur displayed at the fair was already obsolete. The 5-foot dino femur in the exhibit was found in 1900 and came from a brachiosaurus like the bronze sculpture outside the museum.

Over 200 buildings were only meant to be temporary. The White City is said to have inspired author L. Frank Baum to create the Emerald City in his book The Wizard of Oz.

The Field Columbian Museum was in the discussion stages during the fair and was catalyzed by a $1 million gift from Marshall Field (equivalent to $26 million today). Bocciol said that it was fascinating to review objects for the exhibit and see that they had been accessioned to the new museum the day after the fair closed. The new natural history museum opened to the public in June 1894 in what had been the fair’s Fine Arts Building; it remained there until moving to its present location in 1921.

The Fine Arts Building, in turn, became the site of the Museum of Science and Industry in 1933. Julius Rosenwald, a philanthropist and chairman of Sears, Roebuck and Company, pledged $3 million toward its creation in 1926.

Further along in the World’s Fair exhibit, there are fossils and meteorites, a taxidermied lion and a sea lion in its storage crate. By 1895, the Field Museum hired Carl Akeley, who had previously worked for a fair exhibitor. Akeley is shown in a photograph with bandaged arms next to the leopard he had killed with his bare hands. The leopard’s pelt is exhibited nearby.

Unlike earlier taxidermists who stuffed animal skins with straw and arranged their limbs in unnatural poses, Akeley remounted the animals over lifelike sculptures. The two fighting elephants in the Field’s main hall are an example of his work.

At times the exhibit feels very much like an old-time natural history museum, with objects dimly lit for the sake of preservation. But the snowy egret, on his back with his little green beak in the air, has a story to tell: so many of his peers’ wonderful long tail feathers had gone into the decoration of ladies’ hats that the egret was on the verge of extinction. America’s first wildlife preservation act was the result

These lions are part of the xylophone portion of the 40-piece gamelan, an Indonesian ensemble.

Whether it was bird feathers, coal, or skirts made out of coconut fiber, functionality was uppermost in the mindset of 1893. The fair celebrated 400 years since Columbus “discovered” North America and thus the “superiority” of European civilization. Both concepts are wildly disputed today.

The same attitude applied to peoples brought to native villages in the Midway amusement area of the fair. Civilizations were ranked on a continuum in terms of their advancement, which exhibit labels repeatedly describe as “offensive by today’s standards.”

Performers in the Javanese Village wore these masks in theater performances, accompanied by the music of the gamelan.

In one amusing outtake, a group of 60 Canadian Inuit forced to work the stifling Chicago summer in their sealskin parkas quit the fair because they had not received the quality food and fresh water they were promised. The Inuit filed suit and set up their own paid exhibit outside the grounds.

Bigger minds created an ongoing relationship with these Inuit and other peoples whose items found their way into the museum’s 25 million-piece collection, Bocciol said. A 19th century clay singer from the Cochiti tribe in New Mexico, for example, is displayed next to a similarly sized biker and nurse acquired in the late 20th century.

“The first collections give context to the modern one, showing how creative traditions change over time,” notes an exhibit label.

The Java village on the Midway featured a 1000-seat theatre where patrons could hear the gamelan, an Indonesian musical ensemble comprised of percussion and string instruments. Visitors could also sip tea, coffee or cocoa. Exhibit visitors can use a digital interactive to “play” instruments on display, including a xylophone resting on the backs of five blue lions.

Digital interactive also brings old fair photos to life via large murals throughout the exhibit. Flags of many nations wave atop a large building. A little girl steals fruit from a Los Angeles County agriculture display and is chased by a fair guard. A young man in checked trousers writes in his journal in front of the electricity display. Two young women sit outside the Denmark pavilion. The “actors” were museum staff dressed in 1890s garb, filmed against a green screen and dropped back into the photos, Bocciol said.

The woolly mammoth and giant octopus models pictured here were on display in the Anthropological Building of the World’s Fair. Visitors will see this same octopus in the exhibition.

Although admission was 50 cents for adults and 25 cents for children (the equivalent today of $25 and $12.50), more than 25 million people attended the fair between May 1 and October 30, 1893. Since there were only 65 million people in the United States at the time, that means roughly 1 in 3 Americans visited, along with people from around the world, Bocciol said.

“Sell the cook stove, mortgage the house, but get to the fair,” the writer Hamlin Garland was quoted in the exhibit, which Bocciol said rings true to her.

“People were wanting to be part of these events, letting it change them,” she said. “The legacy 120 years later is that we are still discovering so many connections to that event, so many family stories and connections go back to 1893. For me it’s how it really belongs to Chicago history. We get emails and sometimes letters about people’s grandparents, great-grandparents who were at the fair. The firsthand accounts are amazing. I can’t think of any event today that compares. I don’t think the legacy of the Olympics is comparable to this event.”

“Whether they saw the fair firsthand or experienced it through postcards or accounts in newspapers and magazines, most Americans regarded the World’s Columbian Exposition as a cultural touchstone and remembered it for the rest of their lives,” Rydell said in his online Encyclopedia of Chicago essay. “On another level, the triumph of the World’s Columbian Exposition revivified the American world’s fair movement and set a standard against which every subsequent exposition would be measured.”