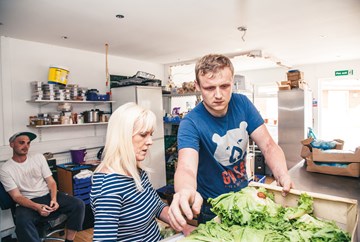 As I begin to chat with Adam Smith, founder of The Real Junk Food Project, sitting across from each other on the top tier of Manchester’s Victoria Baths, it is not lost on either of us that this iconic, picturesque architectural beauty embodies exactly what Smith has set out to do. When he speaks about his stand against food waste and poverty, he is passionate, unstoppable and completely unequivocal. “We should be deeply embarrassed and ashamed as a society that we’ve got children going to school hungry, food banks and homelessness on the rise in this country, resources being wasted all over the planet, and food being unnecessarily thrown away when it’s still perfectly edible.

“There are empty buildings all over the country when people are in need of homes. Give them these homes. The answers are all staring us right in the face.”

The Victoria Baths, a historic, derelict public swimming pool dating back to the early 1900s, has been cleaned up and repurposed. It has been put to good use when once it was left abandoned and considered surplus to requirements. This is at the heart of Smith’s movement.

For those who do not know – and, considering its meteoric rise, it should be hard to miss – The Real Junk Food Project was established by Smith four years ago in a bid to end food poverty. The not-for-profit organization does this by gathering food and other produce that would otherwise be considered waste, past its use-by date, and feeding it to people in cafés where customers are encouraged to pay what they can. This latter point is crucial to the ethos of the project.

“I am more into an empowerment approach. People should be treated as human beings, and be valued the same as everybody else regardless of who they are, where they come from or the situation they find themselves in. People should always be given the opportunity to give back.

“It should be a basic human right to have access to food. We should allow and teach people to not only value their food as a resource but also value themselves.

“There’s a huge stigma around food waste and it’s attached to people who are poor, needy, homeless and vulnerable. To try and break down those stigmas, we’re trying to stop pigeonholing people into these groups. People are human beings.”

Smith picked up the concept after working as a well-paid head chef at high-end restaurants while living in Australia. “I was working on a farm trying to gain Australian citizenship. I had witnessed extreme poverty and homelessness in Sydney and the demolition of the Occupy protest camps on a daily basis. I had come across the "pay what you feel" concept in a restaurant run by a Buddhist monk in Melbourne. And then one day, I was in the middle of the desert, on this farm, and it all just clicked – I’m going to feed the world with food waste. That was it.

“Who knows where it came from. There was nothing around me except for almond trees and a caravan on this horrible farm where the owners treated us terribly. I’d been a chef; I knew how to cook food, I knew how to handle food. I was eating the same food that the pigs were being fed - beautiful squash, apricots and courgettes [zucchini] that had been wasted on neighboring farms. The whole thing just came together. There was no epiphany moment, it was just the whole journey of going to and being in Australia was a very eye-opening experience. I knew I could go back home to the UK and do this.”

Smith is so utterly committed to his aim that, when he gets going, he can speak for 10 straight minutes, without interruption, about the problem he has set out to eradicate and the work the project is doing to achieve this. “I created The Real Junk Food Project as a single café that was created in order to question and expose the reality of food waste in the modern world, but also poverty and the classist approach that we have to poverty.”

In four years, the project has grown from one café to 127 across seven countries throughout the world. In Leeds alone, its city of origin, the project feeds 35,000 people a week. The first Real Junk Food café is about to open in the US and, thanks to Fuel for School, a partner program which diverts food waste to schools, feeding children as well as educating them about how to cook, handle and save food, Smith has reached 20,000 school pupils in Leeds. He has ambitions that the program will go nationwide across the UK within 18 months.

Smith knows connecting with young people is essential if his project is to have a positive, long-lasting effect. “For me, when it comes to tackling issues around poverty and homelessness, I want to deal with it at the bottom end of the spectrum. I try to go right back to the beginning, and that means teaching people not to be wasteful with their food

“We should be empowering and educating these young people. Because at the point of trauma, it can take up to 10, 15 years for people to end up in a position where they are in need and vulnerable, so I say let’s empower this generation. If we don’t tackle it right now at the grassroots, all these problems - food waste, homelessness, malnutrition - are going to continue to exist.

“We could go to supermarkets and ask them to stop wasting food, but they don’t care, they’re raking in too much profit. We could go and give food to people experiencing homelessness but what’s the point because we would just be sustaining homelessness by allowing people to continue what they’re doing, and plenty of other great organizations are doing that anyway.

“What we’re saying is, let’s prevent that from happening in the first place. Let’s empower, educate and teach young people life skills so that whenever they might get into that position they can fend for themselves and provide for themselves and their families.”

Smith is like a bullet train, high speed and streamlined. It would almost be rude to interrupt his stream of consciousness. He immediately strikes me, as he does the street paper delegates he speaks to later that evening on the opening day of the 2017 Global Street Paper Summit, with his knowledge, urgency and will to succeed, even when faced with a problem he admits is only getting worse. “The problem is spiralling out of control. In the UK, we’re so heavily manipulated by the retail industry when it comes to supermarkets and the abundance of food. It’s completely inhumane to think that there are people who go without, alongside 20 supermarkets next door to each other in one street. It’s absolutely silly.

“Why do we need avocados 24/7, 365 days a year – that’s completely unsustainable. Why are bananas being put into plastic wrappers with a date on it? A banana already has a wrapper – its skin! There is a really nonsensical approach to how we handle and behave around our food.”

He is also under no illusions about where the fault lies, and he is not afraid to call out the perpetrators. “As consumers, we have been manipulated to foot the blame by the big corporations who benefit from people returning to their supermarkets and buying more and more food. They say this is what we want. But we don’t really have a choice. We’ve been exploited and manipulated to feel responsible for the way our food industry is run.

“The situation we have is completely unsustainable. We don’t grow enough of our own food, we don’t teach young people about where food comes from. Kids are just manipulated into thinking that apples come from supermarkets in plastic bags. From what I’ve seen and experienced in the past four years, on a national and international scale, things won’t start improving until these companies start losing profits.”

Later that night, underneath the skylights of the Victoria Baths, summit attendees were fed five delicious dishes made entirely from waste food, previously deemed inedible, by the Manchester branch of The Real Junk Food Project. Delegates from 28 different countries were served up fresh salads of fennel and bok choy, a spicy vegetarian chili, and charred marrow and curried cauliflower. The tasty, exotic cuisine was all in keeping with the Real Junk Food philosophy: locally sourced and having been thrown in the trash.

Smith tells me about the growing exposure the project is receiving, with politicians starting to take notice, and how the project’s aims are now being spread to a global scale. “People are starting to look at the fundamentals of the project and what it’s trying to achieve. People are going to go away tonight full of nutritionally valued food, all sourced from produce that would have been thrown away. The environmental impact of that is incredible.

“And yet, across the road from here there are probably families, children, who don’t get access to the kind of stuff that’s been wasted and reused today. That’s the paradoxical nature of our food system. What we are trying to do is expose that and tackle it head on in a very common-sense way. This is the right thing to do in my eyes, and more people should do the right thing.”

Smith says the number of cafés opened and the numberof people being fed is not a true indicator of his project’s success. “The fact that The Real Junk Food Project is still here is evidence itself to show that things haven’t got any better. The fact we’re growing I don’t see as a measure of success – I see it as a measure of the scale of the problem. The more we grow, the more that the problem exists. The more that we lessen our activities worldwide, the more that we’re not needed - that will show how much of a change that we’ve made.”

Despite the gravity of the issue, Smith sees the work of the project as extremely simple to carry out, not revolutionary or ground-breaking. “The project has been seen as radical and all this nonsense but I’m only feeding people. The only reasons people see us as radical is because they’re so far removed from the problem.

“We need to stop focusing on funding and financing and coming up with increasingly elaborate ways to deal with problems. Just give me food and I’ll feed everyone.”