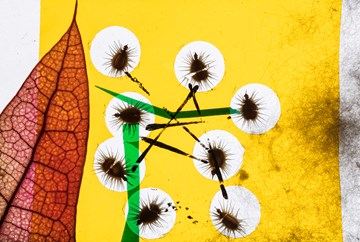 The newest exhibit to come to The Block Museum of Art at Northwestern is Up is Down: Mid-Century Experiments in Advertising and Film at the Goldsholl Studio. It's presented in conjunction with Art Design Chicago, the Terra Foundation’s year-long celebration of Chicago’s design legacy. "Up Is Down" celebrates and explores the trailblazing work of mid-20th century artists/designers/filmmakers Morton and Millie Goldsholl and their Chicago-based design firm, Goldsholl Design Associates. The husband and wife team began to make a name for themselves and their firm in the 1950s with innovative “designs-in-film,” producing studio-applied experimental techniques and avant-garde filmmaking to produce advertisements to be distributed to a broad audience.

Around the 1950s, Chicago had a large number of companies creating educational and promotional films, which were shown in public places and on television. The Goldsholls’ work grew out of this design culture in Chicago. Although the Goldsholls and their firm were compared to the most celebrated design firms of the day, they are relatively unknown today. This exhibition has the power to show the greater Chicago area the impact that the Goldsholls and their designers had on communication. The Goldsholl Design Associates work has remained unexamined within American advertising and design, despite creating graphics for many large and influential companies. The most famous graphic created by Morton Goldsholl is the Motorola “M.” Designed in 1955, it has remained in use for over 60 years. The design firm also had relationships with other corporations such as Revlon, 7UP, the National Football League, and PBS. Lisa Corrin, the Block Museum’s Ellen Philips Katz director says, “The creative impact and influence of this avant-garde firm was significant and has the potential to reframe how we think about Chicago’s central role in American design. The Goldsholls’ story unites themes that connect art history to the histories of consumer culture and the social purpose of design.”

Print, television, and other communication from Goldsholl Design Associates are on display in the exhibit, including rarely seen films, photographs, slides, and posters.

The exhibit takes the visitor through the history of the firm and its subsequent advertisements.

Visitors will see extremely familiar advertisements that were made right here in Chicago. Some of the highlights include See The Light which was a short television ad for 7-Up. The name of the exhibit comes from one of Millie Goldsholls’ works. Up is Down is an award-winning film, dedicated to Martin Luther King Jr., “telling the story of difference, diversity, and the potential dangers of state and and social institutions through the eyes of an unconventional young boy,” which is also on display. Taking the title of this name combined with how the Goldsholls turned the advertising world upside down, Up is Down is a perfectly fitting moniker for this exhibit.

Up is Down at the Block Museum of Art is curated by Amy Beste, PhD, director of public programs at the School of the Art Institute of Chicago; and by Corinne Granof, PhD, curator at Block Museum of Art, Northwestern University. The exhibition is funded by the Terra Foundation for American Art and The Richard H. Driehaus Foundation. The exhibition is open until December 9.