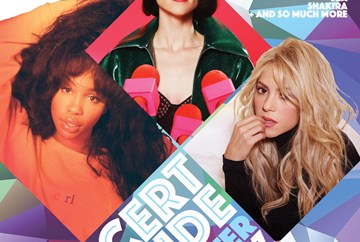 Part of the “Nights We Stole Christmas” series, Foster the People are headed to Uptown to bring some early Xmas cheer. First hitting the airwaves in 2011 with their breakout hit “Pumped Up Kicks,” these indie-rockers have continued to perfect their sound in their latest album, Sacred Hearts Club released earlier this year. Don’t worry, it won’t be a night of “Jingle Bells;” expect a pretty standard set with both old and new favorites.

Known for his androgynous voice, this queer artist has a sound of his own. His previous work has had a poppy electronic vibe, which is in stark contrast to his latest album Revelations. This latest work blends a lo-fi rock sound with intentionally imperfect vocals. It will be quite interestring to see how he bridges these two genres.

If you’ve got a lot of problems, this concert might be for you. One of the biggest names in hip-hop, this rapper is known for his flow. He has been busy since his 2003 retirement putting out five additional albums including his latest 4:44. And this new LP may be one of his greatest, getting critical praise for being real and raw. Join this 21-time Grammy award winner as he performs both old favorites and new hits.

Hailing from St. Louis, this indie folk rocker is quickly gaining a following in the genre. She just released Phases, a compilation of demos and covers that tell a story of how she found her sound. Her full-length releases show a range of sound: sometimes folky, soft and emotional, other times grungy and in your face.

This Chicago band is on a mission to create music that explores human nature and existence. The project of Michael Downing, this producer creates music with a soft, indie pop vibe. With catchy melodies, pleasant harmonies, and violinist on board (a rare treat in pop music) anyone can enjoy these tunes. Join the band as they celebrate the release of their latest album Land of Nod.

At only 18, this French producer has already found a unique and mature sound. His electronic music is atmospheric and chill, with enough of a beat to keep listeners along for the ride. He takes vocal samples and mixes them in a way so they become part of the music, rather than a melody. This creates a smooth effect that is much less frantic than other artists' using similar techniques. Trained in traditional instruments, he prefers the endless possibilities that synthetic sounds can allow.

SZA isn’t new to music, with three EPs under her belt, this neo-soul R&B artist has been creating music for some time. In 2017 that hard work finally paid off with her debut full-length LP CTRL. This breakout album premiered at #3 on the Billboard 200 and has continued to receive acclaim (and Grammy buzz) including her platinum single “Love Galore,” a quiet and catchy duet that is sure to get stuck in your head. With influences of jazz and traditional R&B, catch her live as she shows off how she flawlessly blended these genres.

The persona of Lizzy Grant, Lana Del Ray is known for her highly stylized music with indie rock vibes and deep, drowsy vocals. Her music is dramatic, whimsical, and continues to emit Americana vibes. This tour is to promote her latest release Lust For Life.

Annie Clark is one of those people who seems endlessly cool without really trying. Her established brand of art rock balances experimental sound with catchy hooks. It wasn’t until her self-titled fourth LP, St. Vincent that she gained the acclaim she deserved and received the Grammy for Best Alternative Album, one of only two women solo artists to do so. Join her as she tours to promote her latest album MASSEDUCTION.

Part of the “Tomorrow Never Knows” fest, this indie band will be visiting Chicago all the way from New Zealand. Naming their band after the two friends who inspired them to start making music, their sound is both catchy and dreamy, with a perfect laid-back indie-pop vibe. After living separately across the globe and making music via email, the group is reunited to work on their latest album, Willowbank.

Born in Chicago, this two-time Grammy award winner is no stranger to our city. Her deep and sultry vocals perfectly complement her R&B sound. Refusing to become stagnant, her latest album Honestly has a much more contemporary sound. Join her as she performs songs both old and new.

One of the few belly-dancing pop artists, her hips definitely don’t lie. This Colombian singer achieved success in the Latin world in the 90’s and broke into worldwide success shortly after with her first English-language crossover single “Whenever, Wherever.” Known for her vibrato and yodeling vocals, she has had multiple top 40 hits. Now the best-selling singer in South America, she is still going strong. She released her 11th studio album, the Spanish language El Dorado earlier this year.

Hailing from Australia, this up-and-coming electropop artist is making a tour stop in Chicago. Her music is catchy and melodic, blending hip-hop vibes with an electronic sound. Her latest single “Bodies” is both personal and political, a song about the unrest her family has experienced in Syria and the plight of Syrian refugees being seen as “just bodies.” With two new singles in 2017 and a tour next year, she will likely have additional unreleased music to play as well.

Whether or not you can correctly pronounce her name, this is an artist who should be a household name. She made a splash on huge hits “Lean On” and “Cold Water” with Major Lazer this year. Her sound is both experimental and mainstream, creating endlessly catchy hooks and harmonies that are both unique and radio-ready. This October, she surprised fans with an unannounced EP When I Was Young.

It is well known that Sweden produces some of the world’s best pop music, but the Söderberg sisters are ready to prove the Swedes make great folk as well. With a bit of twang and extremely earnest vocals, this duo has been creating songs with a modern folk sound for close to 10 years. Their latest single “It’s a Shame” goes even further into country music territory with a song that would make Patsy Cline proud. Join them as they tour to promote their fourth album Ruins expected to be released in early 2018.

It must be a New Zealand invasion this winter as another Kiwi is headed to Chicago. If this sounds like a name you used to know, it’s probably because she was featured on Gotye’s hit single “Somebody That I Used To Know.” An artist all her own, Kimbra has a unique sound that blends electronic pop with jazzy vocals. She is currently promoting her upcoming album Primal Heart.

Spend Valentine’s Day with up-and-coming rapper NF. Extremely passionate and a little bit angry, this artist has clear influence from his favorite rapper Eminem. The instrumentation of his music takes a back seat and allows his syncopated rhymes and very personal lyrics to be front and center. He is signed to a Christian label, but he doesn’t consider himself a Christian rapper, focusing on making music anyone can relate to. His third album Perception was released last month and exceeded expectations by debuting at #1 on the Billboard 200.

Don’t say their name at the dinner table, STRFKR is headed back to Chicago. This indie rock band from Portland started 10 years ago as a solo project of lead singer Joshua Hodges. It’s evolved into a band that has released five albums and more recently a collection of demos and partial songs they have named Vault. Their goal is to create music you can dance to, which they absolutely succeed in doing with their catchy bass lines and falsetto melodies.

The sound of Memphis is strong with Valerie June. Combining soul, gospel, and folk, this singer-songwriter is stopping in Lakeview to share her brand of sound. Blues lovers should definitely attend this show, as she manages to create music that sounds both traditional and contemporary at the same time. Join her as she tours to promote her latest album The Order Of Time.

Lauv’s instagram profile says he’s not a hopeless romantic but his music says otherwise. With a name meaning “Lion,” he’s ready to hit the airwaves with a roar. This up-and-coming pop artist already has a hit single under his belt with the endlessly catchy “I Like Me Better.” His sound is not a huge departure from radio-ready pop music today, but his vocals have an genuineness that pop music can sometimes lack.