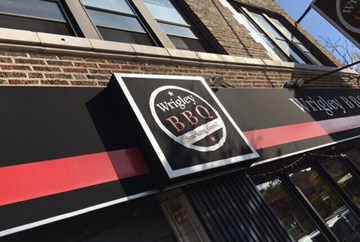 Debbie Booker sells her StreetWise magazines outside the Whole Foods on Halsted and Waveland, and over the years, she’s built up some faithful customers. Those customers greet her with smiles when they see her, so you can imagine how concerned they were when Debbie was “in a daze” as she described one Monday morning.
“Excuse me. Are you okay, Debbie?” One woman asked.
“Oh, sure, I’m sorry. I was just thinking about what I’m going to eat soon,” Debbie replied followed by her warm chuckle. Debbie was about to walk around the corner to Wrigley BBQ on Broadway and Addison, and she was working up a distracting appetite in the meantime.
On the walk over, she made her decision. “I was eating baked barbeque chicken, spaghetti, tacos, pizza, and all this sauce already at home,” she explained. “I was going to get the ribs at first, but I wanted something different. I didn’t want any more sauce, so I ordered a cheeseburger instead. No more sauce today!”
Unfortunately, when Debbie arrived and ordered her burger, she didn’t quite know how to answer the question, “how do you want your burger cooked?” She replied, “I want the regular burger,” without knowing the difference, and she received a burger closer to rare than any other burger she’d ever eaten.
“The burger was dark on the outside, real dark,” she explained, “and the inside wasn’t done. It was really red. I guess that’s why he asked me what kind of burger I wanted. He probably meant rare, medium rare, medium… and “regular” is how I told him to fix it. That’s probably why it ended up tasting like that. Next time I go in there, I’m gonna get me some rib tips.” She said this last part cheerfully while searching through the menu for a picture to prove its savory merit.
Debbie enjoyed her side dish. “The fries were good. That’s how I cut my potatoes. It’s not like McDonald’s French fries where they’re cut into shoestrings.”
Debbie ate her fries from the comfort of a window seat as she listened to the country music playing in the background, soaking in the atmosphere. In the cozy space, she looked around at the other people with whom she shared company. “I was comfortable, and I felt good sitting there with different people. I felt like I was at home,” Debbie said.
At one point, another customer even asked to buy a StreetWise from Debbie. She was nervous to make a sale inside, but no one had a problem with it being just this once.
Debbie complimented the service staff on their hospitality, noting their smiles and polite attitudes. The respectful staff and the cozy atmosphere were pulling Debbie’s appetite back to the Wrigley BBQ menu.
Debbie has decided to pass on the burgers next time she heads over after work at least until she knows how to describe her ideal burger better. For now, she’s looking forward to getting her fingers messy with the sauce from those rib tips.