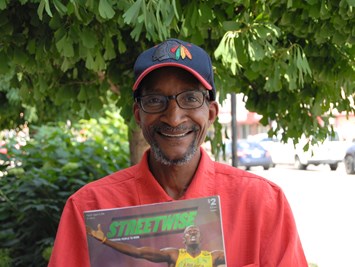 Russell Adams is an all around Chicago man, with a love for the city’s sports teams that only another Chicagoan can fully understand.

Standing in front of the Walgreens at Clark and Lake, Russell almost always wears a baseball cap representing the Bulls, Blackhawks or Bears — the “three B’s,” as he calls them.

He owns Cubs and White Sox caps, too, but those tend to cause conflict among his customers, he said, so he avoids wearing them. The gesture may seem small, but it embodies the spirit of Russell’s salesmanship. It’s a quiet, but respectful acknowledgment that his customers come first.

“I don’t mess around,” Russell said. “I take my job seriously.”

Russell has been selling StreetWise since 2002, a date he refers to as the year before the Cubs went to the playoffs.

Over the years, Russell has become the top seller of the magazine, and he now helps coach new vendors, giving them some of his tips for success. Although he says he has no sales strategy, Russell employs a certain mindset, which he tells new vendors is key.

“You got to think positive first. ‘I need to do this to pay my bills. I won’t be on the street.’ You got to be motivated,” Russell said. “And then you got to know how to take rejection. If somebody says no, it’s ok. It can be frustrating at times, but I don’t let it bother me.”

All through his life, Russell has bounced back from whatever came his way. He grew up in the foster care system, moving from home to home before he decided he wanted to join the Navy and make a life of his own at 17 years old. When the Navy rejected him because he didn’t have his high school diploma, Russell turned to the Marines, who took him in.

Russell spent the last of his teenage years in San Diego with his fellow Marines. On the weekends, they traveled around California — to San Francisco, Los Angeles and Disneyland, where he took his first ride on a rollercoaster with the other new recruits. (“Never, ever, ever again,” he said of the rollercoaster experience.)

When his three years were up, Russell moved back to Chicago, but he credits those years in the Marines as the most important in his life.

Over the next several years, Russell experienced a series of life’s ups and downs. He worked as a manager at a thrift store, where he met his girlfriend of 31 years. She was a regular customer at that time, and she visited the store often with a group of friends.

“She was always the quiet one,” Russell said. “I thought, ‘I like her,’ so I started talking to her.”

Soon, Russell took her on their first date — dinner and a movie downtown — and they have been together ever since, even through the tough times.

Years later, Russell was laid off from another job at a printing company, where he worked for 15 years making copies of blueprints and doing other tasks. He also became addicted to crack cocaine after he began casually using it. Russell’s addiction became a strain on his relationship, and one day after he sold an unusually high amount of StreetWise magazines, he decided he wanted to quit.

Russell usually spends five days of the week — Monday through Friday — selling his magazines to support himself and his girlfriend. He gets up at 5 a.m. every day to make it to the Loop by 6:30 a.m. and grab coffee and a doughnut before hitting the street to sell StreetWise.

Around 1 p.m., Russell packs up his remaining magazines and heads up north to the StreetWise offices in Uptown, where he has another part-time job cleaning and emptying trash cans. On Tuesdays (is this the right day?) he makes his way to Uptown a little earlier to record the weekly SportsWise column with fellow vendors Vince Callaso and John Hagan.

If Russell’s morning at Clark and Lake was successful, he’ll go home after finishing his job at the StreetWise offices. On slower days, however, he’ll head back downtown to his second location at Washington and Wells to sell more magazines during the evening rush hour.

One of the reasons Russell is a top seller of StreetWise is his dedication to his customers. He said there are several regular customers of his that once spurned his offer of the magazine. Once he was able to get them to stop and talk to him, they started buying the magazine and coming back for more.

Other people have told Russell they can’t buy a magazine because they didn’t have enough cash on hand. In these cases, he will still give them the magazine and tell them not worry about the money. They almost always come back and show their gratitude later, Russell said.

“You can’t care about you all the time,” Russell said. “You got to think about the other person.”

Russell’s consistent presence at Clark and Lake has afforded him some pretty famous customers over the years, too, including former Gov. Pat Quinn, Cook County Board President Toni Preckwinkle, former Mayor Richard M. Daley, and even Jimmy Butler of the Chicago Bulls. Russell also saw Scottie Pippen once, but he said he was too star-struck to try to make the sale.

Despite his success over the years, Russell continues to look for new ways to find customers and engage with them. He comes across as a soft-spoken man much of the time, but his latest method challenges that characteristic.

“Get your StreetWise from the world’s greatest vendor!” Russell shouts as potential customers walk by.

He said he started this sales technique just a few months ago, but it seems to be working. He’s still the magazine’s top seller and has now been voted the best vendor, a title he accepts with pride and humility. 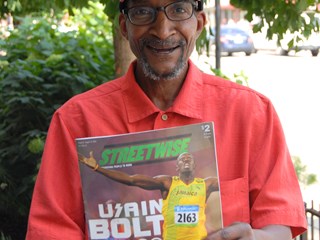 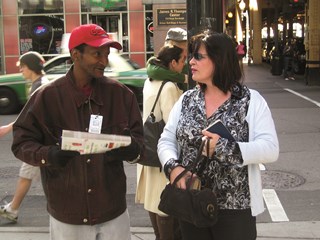 StreetWise provides Chicagoans in need with “a hand up, not a handout. StreetWise creates employment opportunities for homeless and individuals experiencing poverty. Anyone who wants to work has the opportunity to move themselves out of crisis. Learn more at streetwise.org