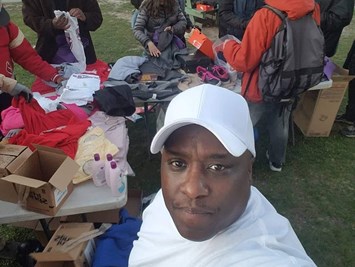 As the CEO of All Kids Matter Foundation, Taste for the Homeless, and Next Level Custom Mascots, Michael embodies the spirit of giving and action. For the past five years, he has made it his mission to provide companionship, goods, and services for the homeless population in Chicago. Michael pushes himself to capacity, serving an average of 500 meals daily. Michael and his two brothers were raised in a single-parent home in the projects of Altgeld Gardens from the late 1960s. His upbringing was similar to so many- a poor, abusive- and drug-filled home, yet so different with the help of his community and his own will.  Not only does Michael feed thousands a year, he creates gorgeous mascots for neighborhoods around Chicago and the Chicagoland area.Michael lives by his own sayings, "Everyday with the homeless is like spending time with God, these are HIS children, our family, friends, brothers, sisters, uncles, aunts, mom and dads--Who are we as human beings if we ignore the suffering of others!" It is with this, Michael hopes to inspire others to take on and do what they can for others.